MidCity is proud to announce that the Washington Business Journal has named our 20 year-long partnership with Academy of Hope, an adult charter school with two campuses in Washington, DC, as one of the winners of this year’s 2019 Corporate Philanthropy Awards.

The award honors the Washington region’s most active and inspirational companies and nonprofits who have made a difference in their communities through both financial and volunteer philanthropic work. 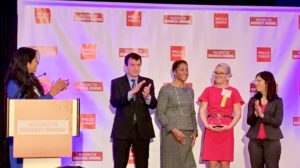 MidCity and Academy of Hope Adult Public Charter School have partnered over the past two decades to enable residents living in MidCity-owned subsidized properties to benefit from educational services offered by AOH. In just the past five years, 70 Brookland Manor residents have attended Academy of Hope. Throughout the partnership, MidCity has contributed over $1 million to the school, including a substantial contribution toward Academy of Hope’s acquisition of its Ward 5 campus in Washington, D.C. 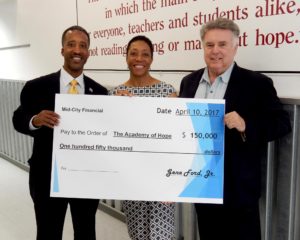 Madi Ford has served on Academy of Hope’s Board of Directors since 2018, and she will chair Academy of Hope’s upcoming 35th anniversary gala in April of 2020, with a goal of raising $500,000 in donations. Dr. Robert Johns, MidCity’s Director of Community Relations, routinely collaborates with Academy of Hope on student recruiting events. He also serves on the school’s Leader of Hope Council, a junior board of ambassadors who focus on serving Academy of Hope learners through community outreach, engagement, public relations, fundraising, and advocacy.

Lecester Johnson, CEO at Academy of Hope, noted: “MidCity and the Ford Family have partnered with Academy of Hope for many years – from having employees on our Board of Directors and Leaders of Hope Council to being a leading supporter for renovations of our Ward 5 campus, Mid-City’ support helps Academy of Hope to serve some of the District’s most vulnerable residents. Mid-City is a powerful example of what corporate philanthropy can and should be.”

We are incredibly grateful to Academy of Hope for all of its hard work that has helped so many students — and Brookland Manor residents — to build empowered, economically stable lives and futures. We look forward to another 20 years of partnership.